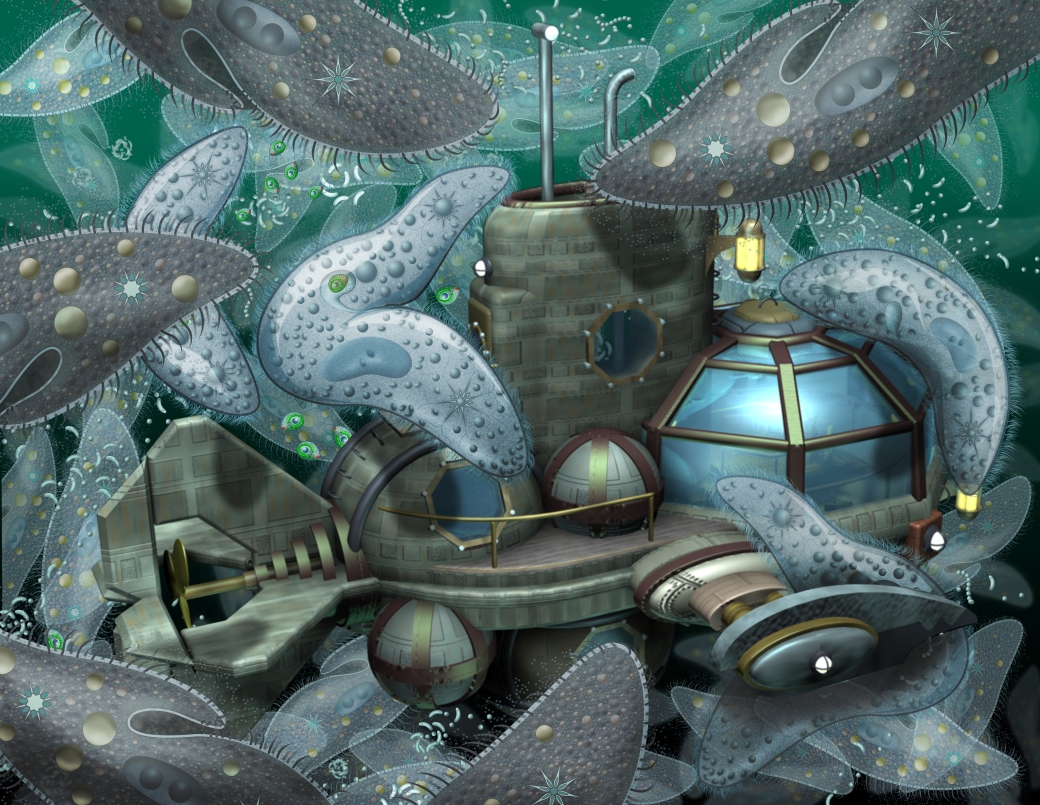 “It was your reflection in the glass,” Barron Wolfe states with a dismissive certainty that I envy.

“I wish that it had been,” I respond. “Not only did it not look anything like me, it was clearly outside the ship.”

“But how can you be sure?” asks Lyra. “Maybe your reflection combined with the dim light in the cabin…”

“Whatever, or whomever it was swatted a flagellating bacterium out of its way before it vanished back into the dark. It was clearly outside. But before it disappeared, it looked straight at me – into me.  And its eyes…” I cannot find the words to finish my thought.

“What about its eyes,” pressed Lyra.

“They were curious and intelligent,” I tell her. “But…” And again, words fail me.

“Some microorganism then,” theorizes Barron. “Without a helmet and suit it couldn’t have been human.”

“Exactly, Barron,” I add in agreement. “Eyes with intelligence behind them. But not human eyes.”

“Ridiculous,” scoffs Lyra. “I’m sorry, but there are no microorganisms with eyes. Some have photo-sensitive eyespots, but none have actual eyes that can look around and see things. Microorganisms haven’t the nerve complexity to…”

“And yet,” I say softly, my mind tumbling down a trail of possibilities, “I know what I saw.”

And in the silence that follows I suspect that my crew now considers their skipper utterly mad.

“All hands,” came the voice Gyro over the voice pipe, “I’m getting turbulence on the rudder. Captain to the pilothouse, please.”

Turbulence on the rudder… something big and moving nearby.

“Looks like, for now, we have bigger fish to fry,” I declare.

The panes of the observation dome show a smoky green light coming down from the surface. Outside, the pond bottom drifts eerily past our windows. Surrounding the Cyclops is a dim world made up of rotting pond plants and microorganisms. This is the graveyard of the pond – where all pond organisms fall to rest when life ends. And yet, this is where life begins again! All thanks to bacteria. They are everywhere! Some are short rods – others long ones. Some are even spring-shaped spirals. Or chains of small round beads. Or hair-like strands! We cannot count or classify the many species that thrive here on the pond bottom, breaking down dead organisms and absorbing the all-important chemicals needed for life.

Through the darkness we see larger shapes in the gloom. Predators? Scavengers?

“Gyro, turn up the driving lamps…” I tell my helmsman. “Perhaps we can catch a glimpse of whatever is worrying your rudder.”

As our lights penetrate the gloom, a writhing wall materializes out of the shadow. Paramecium has arrived, and by the score. Many of these large single-celled organisms are feasting on the bottom-dwelling bacteria, gorging on them as fast as they can – and there are plenty of bacteria to go around! One after another the paramecia arrive, establish feeding stations, and begin drawing bacteria into their oral grooves by the gullet-full.

Directly ahead, a throng of paramecia has anchored itself against a mound of bacteria-rich detritus. The ciliated protists use their cilia rather ingeniously to hold relatively still to feed on the bacteria, a situation that affords us an excellent opportunity to observe the large single-celled organisms up close. Their internal organelles are easily visible. I reach for my observation journal and scratch out a short list of first impressions.

“Skipper,” Gyro says with the now familiar note of concern, “the parameciums…”

To underscore Gyro’s concern, the ship is jostled lightly, then more forcefully, as individual paramecia brush against the hull.

“Individually there isn’t much damage they can do to the ship,” says Lyra, then adding, “but they are the size of orca whales – to us anyway. A large number of them might cause some damage. Maybe it would be a prudent idea to move on.”

I can scarcely believe that these words of caution are coming from my usually reckless naturalist.

“A prudent suggestion,” I agree. “Gyro, watch for a gap in the paramecia. When one appears, take us through it.”

We find ourselves beneath a dome of writhing, contorting oblong shapes, fluidly pushing their way deeper into the detritus mound, competing for the richest bacterial mines.

After several moments of observation, Lyra turns her back on the external view. “Jonathan, some of these bacteria may be light sensitive,” she announces. “I believe they are drawn to the ship’s lamps. And that, in turn, is attracting more of the paramecia.”

“That would explain why there seems to be more and more of these… paramecia,” says Gyro with razor-sharp diction, and a wink in my direction.

I give the order to douse the driving lamps, and to reduce the Edison current to half illumination. Darkness fills the observation panes.

“That’s doing it,” reports Lyra after a short time. “Bacteria activity is slowing down a bit. Less activity should equate to less bacterial metabolism. Emphasis on should…”

“It’s working,” announces Gyro, visibly straining to see through the dim murk. “I think there’s a gap opening up at one o’clock.”

Cyclops inches forward, her bow aimed for an irregular void in the otherwise impenetrable wall of paramecia. The gap reveals nothing on the other side but blackness. We steam ever so slowly toward that opening. The perimeter of the opening shifts constantly as paramecia jockey for the best feeding stations, but I am encouraged to see that with each passing moment the gap remains large enough to accommodate Cyclops.

“When we enter the gap,” I tell Gyro, “turn the driving lamps back up. I want to see where we are going.”

The edges of the opening, alive with feeding, contorting, whale-sized protozoa, move slowly past the observation panes. We are tiptoeing through the lion’s den, shielded by our science – the sightless organisms do not detect CO2-free Cyclops.

“We are almost through the gap,” reports Gyro.

As we leave the living threshold, Gyro turns the control and sends more Edison current to the driving lamps.

“What in the name of Neptune…” shouts Lyra, staring straight ahead, shielding her eyes.

I cannot make sense of what I am seeing. Brilliant lights are shining back at us, filling the pilothouse with warm illumination. But how?

“It’s glass,” says Gyro, laughing. “And those are our own lamps being reflected back at us!”

To illustrate his conclusion, Gyro fades the lamps down, then up again. The lights shining back at us are indeed our own. But as I look at the reflection I see something else set behind that glass, and words catch in my throat. I take a few steps forward, to the front of the pilothouse. I reach out and touch the glass of our own observation dome, now less than a quarter millimeter from the mysterious reflective surface beyond. There, behind that larger wall of glass are faces. Many faces.

“Do… do you see them?” I stammer to whomever is listening.

Barron arrives in the pilothouse, but is moved to silence. There is a long moment of timelessness, an eternity thunderous with the sound of nothing. Then finally, Lyra steps up to my side and places her hand on my shoulder.

“Yes, Jonathan.” Her voice is hushed, both convinced and disbelieving at the same time. “We all see them, too.”

One thought on “Faces in the Glass”

This is a text widget, which allows you to add text or HTML to your sidebar. You can use them to display text, links, images, HTML, or a combination of these. Edit them in the Widget section of the Customizer.
%d bloggers like this: